SMITH IS A RACING DINOSAUR WITH A T-REX REPUTATION 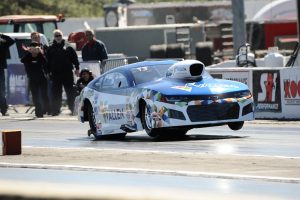 Rickie Smith, of Kings, North Carolina, is a drag racing dinosaur, one of the last of a do-it-yourself breed that once dominated the straight-line landscape.

While rivals fly in and fly out to compete in races like this week’s ADRL Summer Drags at US 131 Motorsports Park, “Tricky Rickie” still drives his own truck-and-trailer, handles all the set-up and the maintenance work on his IDB-sponsored, nitrous oxide-injected Chevy Camaro and, most importantly, regularly gives unsolicited driving lessons to a bevy of younger adversaries.

The latest to graduate from “Mr. Smith’s School of Starting Line Deception” was NHRA point leader Troy Coughlin Sr., who was dispatched in the final round of the NHRA Thunder Valley Nationals two weeks ago at Bristol, Tennessee.

While his girth may be a little larger than it was when he wrestled competitively and played high school football and while his hair may have gone gray and while he may not have adapted to all the modern trends, don’t mistake the 63-year-old native of King, N.C., for one of those passive, leaf-eating dinosaurs.

Rejuvenated after recent back surgery, Smith is the unchallenged T-Rex of a Pro Modified division in which he will begin his quest for the 2017 ADRL championship with qualifying sessions Friday at 4 p.m. and 7:30 p.m.

Smith, who has won 11 world championships in three different racing classes for three different sanctioning organizations, hopes this year to add his first ADRL, a feat made possible by the crafting of one of the series three Pro Mod divisions to the rules that govern the NHRA series in which he has won three titles in the last four seasons.

Forty-two years into one of the most remarkable careers in motor racing, Smith remains the auto racing equivalent of a one-man band. And he wouldn’t have it any other way.

Although his mechanical skills, especially in chassis set-up, have kept him at the forefront for more than four decades and taken him as far away as the Middle East, where he raced in the Arabian Drag Racing League, it is his driving that is the stuff of legend.

“The first year I went into Pro Stock, we could run pretty fast (but) I was getting kind of wore out because (the other drivers) knew how to play the (psychological) game,” Smith recalled. “I had run (IHRA) Super Modified and won two championships (1976 and 1977) but when I went into the pros, it was a little bit meaner crowd up there.

“Either I had to get mean or get out,” he said. “I figured with my background of high-school football and everything else, I wasn’t about to lay down. So I just got mean right along with ‘em.”

Despite his reputation, Smith never has taken success for granted. He knows how much work it requires and he admits that he is kind of surprised that he still is willing to make the necessary physical and emotional commitment every year.

“The last race you win could be your last one,” he said. “It’s that tough. Things have got to line up for you. It seems like out of four rounds, you’ve got to get a lucky round. There’s a lot of good-running cars out there that hardly ever win a race.”

A Carolina racing Hall of Fame member and a legend among Mountain Motor Pro Stock fans (on the strength of five IHRA titles), Smith has toyed with retirement but just couldn’t walk away – not even after he and his son Matt both won NHRA championships in 2013.

In addition to the NHRA Pro Mod class in which the Smiths will compete, champions also will be crowed in Outlaw Pro Mod and Insane Pro Mod classes, in Nitro Harley, in Top Dragster, Top Sportsman, Top Bracket and two Jr. Dragster classes.

Saturday’s program will begin with “last chance” qualifying for pros and 11 a.m. First round of pro eliminations will begin at 1:30 p.m. with a jet-powered Pro Mod scheduled to wrap things up at 9:30 p.m.

In the ADRL’s unique format, there is no gate fee or fee for a pit pass. It’s $20 per carload to park – whether you bring yourself or your neighborhood.