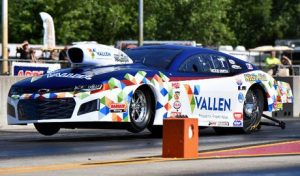 Smiths, Laughlin Among Weekend Race Winners at US 131 Motorsports Park

What the 2017 ADRL Summer Drags lacked in quantity, it delivered in quality at US 131 Motorsports Park where event champions included 11-time world champion Rickie Smith, his son Matt Smith and Texan Alex Laughlin, all three of them World Championship contenders on the NHRA Mello Yello pro tour.

While a seemingly ageless Rickie Smith dispatched veteran Billy Harper as expected in the Pro Modified final round with a solid 5.800 from his IDG Chevy Camaro, Matt Smith made the most of his weekend away from Pro Stock Motorcycle competition to drive a second RSR Chevy to victory in the Outlaw Pro Mod class.

It was Rickie Smith’s second major win in three weeks after he scored in the NHRA Summernationals in New Jersey on June 11.  Matt Smith, a two-time Pro Stock Motorcycle world champ, just missed a tour victory last week at Norwalk, Ohio, where he was runner-up to point leader L.E. Tonglet after qualifying No. 1.

As for Laughlin, he followed up his June 18 NHRA Pro Stock win at Bristol, Tennessee, by celebrating a Top Alcohol Dragster title at US 131.

The NHRA pro tour theme even extended to the Nostalgia Pro Stock arena where Kevin Prior of Warrenton, Missouri, drove his Warren Johnson tribute Oldsmobile Firenza past the 1979 “Bob Glidden” Plymouth Arrow owned and driven by Rick Cassel.

Cassel, from Fredonia, Wisconsin, is a former Top Fuel, Funny Car and Top Alcohol tuner and crew chief who has found a home on the nostalgia tour.  The 58-year-old formerly turned the wrenches for such fuel notables as Cruz Pedregon and Bob Vandergriff Jr.

Fans also were treated to the car-crushing antics of Alan Peso and “The Predator” monster truck and to an autograph signing session with James Goad and Ryan Martin, two stars of the Discovery Channel’s popular Street Outlaws TV series.

MARTIN, Mich. – Final round results from the 2017 ADRL Summer Drags at US 131 Motorsports Park: