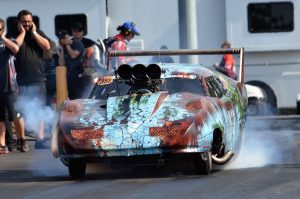 Start with Pro Mods, lots and lots of Pro Mods.  Throw in nitro Harleys and some hot rods.  Then add dragsters, a jet, a little Street Outlaw TV cred, a dash of Jr. Dragsters and you have the recipe for next week’s (June 30-July 1) ADRL Summer Drags at US 131 Motorsports Park.

Beginning with pro and sportsman testing (9am to 2pm) on Friday, the Summer Drags promise a little bit of everything in high performance including the NHRA Pro Mod Chevrolets of world champions Rickie and Matt Smith, both from King, North Carolina and the pirate-themed “Black Pearl” Chevy Nova, the only jet-powered Pro Mod on the planet.

Also part of the package is the ADRL’s free admission format – no gate fee, no pit pass fee, no surcharge; just $20 per carload for parking whether there’s one person in the vehicle or the entire Mormon Tabernacle Choir.

Rickie Smith, who’ll compete at the quarter mile distance in his IDG Camaro, is the three-time and reigning NHRA Pro Modified Champion, the five-time former IHRA Pro Stock Champion and a winner of the NHRA tour event at Bristol, Tennessee just two weeks ago.

His son Matt is a two-time NHRA Pro Stock Motorcycle champion (2007 and 2013) who is making the transition from two wheels to four in a nitrous-injected Chevrolet capable of reaching quarter mile speeds of 250 miles per hour.

While the Smiths will headline the program, they will share the spotlight with James Goad and Ryan Martin, two stars of the Discovery Channel’s popular Street Outlaws series, who will be on site with their race cars to sign autographs and talk street-legal performance on Friday.

Both on the current “List,” Martin drives the bright red, twin-turbo “Fireball” late model Camaro, while Goad has taken a completely different path with his “Reaper,” a 1968 Camaro equipped with the a nitrous-oxide booster package.

Open testing from 9 a.m. until 2 p.m. Friday will be followed by pro qualifying sessions at 2:30 p.m. and 6:00 p.m. followed by exhibition runs and the jet.  On Saturday, a last chance qualifying session at 11 a.m. will set the pro fields for eliminations beginning at 1:30 p.m. with the jet show tentatively scheduled for 9:00 p.m.