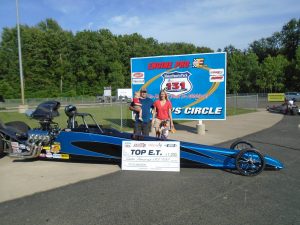 Almost every time they’ve lined up to run the Lane Automotive Bracket Series at US 131 Motorsports Park over the past two years, Scott Taylor has distinguished himself as a candidate for Gary Hunt’s Racer of the Week award presented by Aeroquip.

Nevertheless, last week’s performance was exceptional even by Taylor’s high standards.  Over two days of competition, the 36-year-old father of three and owner of a Portage excavating business won two races and was runner-up in a third while posting an average reaction time of .016 of a second.  As a result, instead of just being a candidate, he is this week’s deserving honoree.

Scott drove his dragster to a seven-round Top ET victory on Sunday after going three rounds on Saturday.  That enabled him to pad his point lead in an ongoing bid to repeat as US 131 track champion.

In addition to his Top ET success, he also made it to the final round of the Dick Motyka-organized Mojo Quick 16 on both days and won the whole shebang on Saturday.  Like so many others, Taylor’s racing is a family affair.  While Scott was plowing through the competition, wife Michelle, who also races, was busy selling 50/50 raffle tickets to benefit the US 131 bracket finals team.

Now, if there was just a way to get their three dogs involved, life would be perfect.

Congratulations, Scott, from Gary Hunt and everyone else at US 131 Motorsports Park.

Gary Hunt is in his tenth season as the track announcer at US 131 Motorsports Park, a track on which he used to race in the brackets and Stock Eliminator.  His experience as a race car driver (he won seven points championships) has served him well behind the mike and while he often misses the thrill of competition, his “desk job” is not without its benefits.  “It’s given me the best seat in the house, which is always climate controlled,” he said.  “I never break any parts, don’t have to wait in line and I leave with a little bit of money every week.”