OVERKAMP PREVAILS WITH ‘NO MISTAKES’ WEEKEND 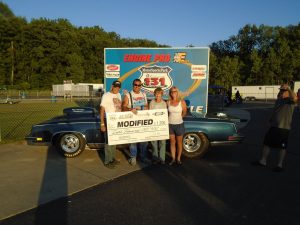 OVERKAMP PREVAILS WITH ‘NO MISTAKES’ WEEKEND

For most of the racers who compete in the Lane Automotive Bracket Series at US 131 Motorsports Park, the round trip rarely exceeds 160 miles whether the starting point is Lansing, Kalamazoo or Grand Rapids.

However, for Scott Overkamp, this week’s winner of Gary Hunt’s Racer of the Week award, the track represents a 2,400 mile round trip from his home in Hernando Beach, Fla.  Fortunately it’s not journey he must make each week – just once to start the summer and once to end it.

In between, he competes for points in the Modified division at the wheel of a potent, but unassuming Chevy-powered 1986 Oldsmobile Cutlass Supreme.

Last week, the Muskegon native became the sixth different Modified winner this year and moved up to fifth place in points with a performance that he described perfectly on his Facebook page: “Seven rounds, no mistakes.  What a day!”

Overkamp’s average reaction time for those seven rounds was .019 and he threw down a .024 package in the final round to dispatch Ohio’s Damien Hazelton.  Quite a contrast to a year ago when he missed the final two months of the campaign after his Florida house was flooded during Hurricane Hermine.

Congratulations, Scott, from Gary Hunt and everyone else at US 131 Motorsports Park.

Gary Hunt is in his tenth season as the track announcer at US 131 Motorsports Park, a track on which he used to race in the brackets and Stock Eliminator.  His experience as a race car driver (he won seven points championships) has served him well behind the mike and while he often misses the thrill of competition, his “desk job” is not without its benefits.  “It’s given me the best seat in the house, which is always climate controlled,” he said.  “I never break any parts, don’t have to wait in line and I leave with a little bit of money every week.”

About the Author: Jason Peterson